Thanks to Ruth of Silver Screenings and Maedez of A Small Press Life and Font and Frock for hosting the blogathon. Please visit their fine sites. You'll be glad you did. 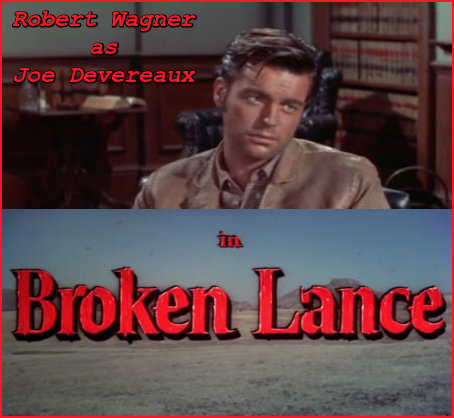 I fell in serious like with Joe at age 11 when introduced to the film by my mother, a classic movie lover. She also thought (and still thinks at age 94) that the 24-year-old Robert Wagner was especially dreamy in this well-done tale of the Southwest. Dressed in western garb by William Travilla and riding a beautiful pinto, Wagner looks so handsome in CinemaScope and Technicolor thanks to the talent of cinematographer Joe MacDonald, known for his fine outdoor color photography.

In addition to Joe, Broken Lance also features one heinous hunk and two himboes. Matthew Devereaux (Spencer Tracy) had three sons by his first wife. She died when their boys were young. Matt was busy building an empire and had no time for his boys. He never showed them the affection they wanted and needed desperately. Joe's mother treated her stepsons with love and encouraged her husband to do the same. Unfortunately, her stepsons rejected her out of prejudice and Matt did not listen to his wife on the matter of his sons. He continued to treat them worse than the hired hands. 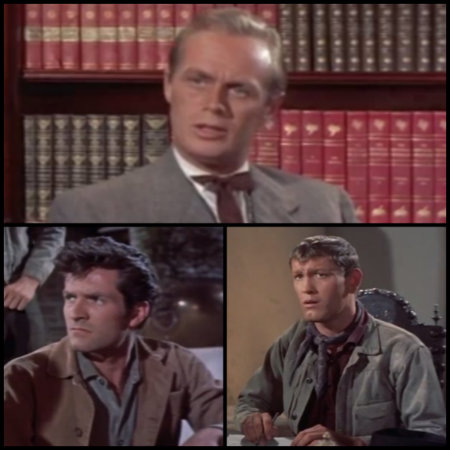 The heinous hunk in the top photo is Ben Devereaux (Richard Widmark), the oldest. The two himboes in the bottom photos, Hugh O'Brian as Mike Devereaux and Earl Holliman as Denny Devereaux, follow Ben like sheep out of their stupidity. 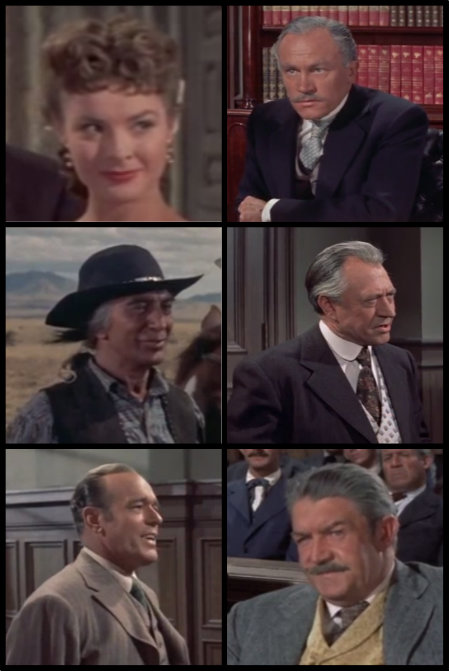 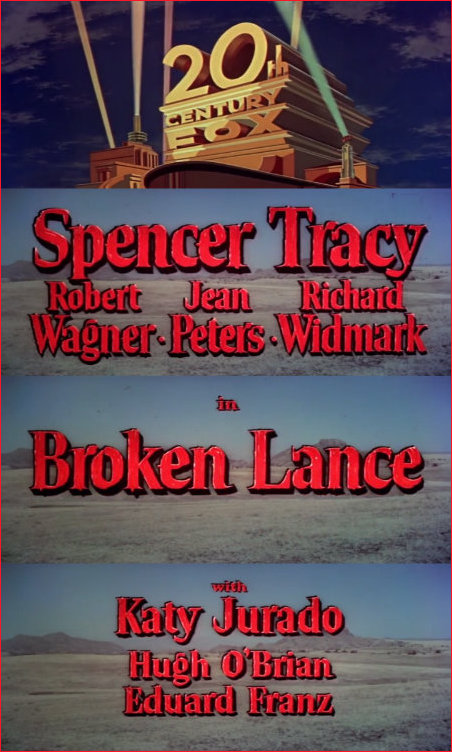 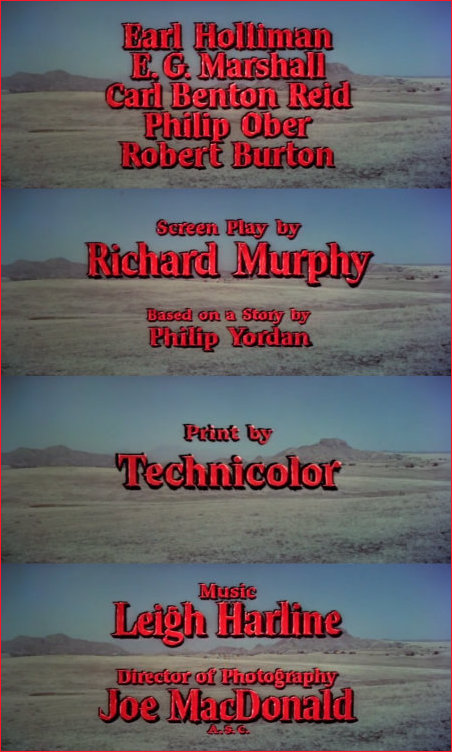 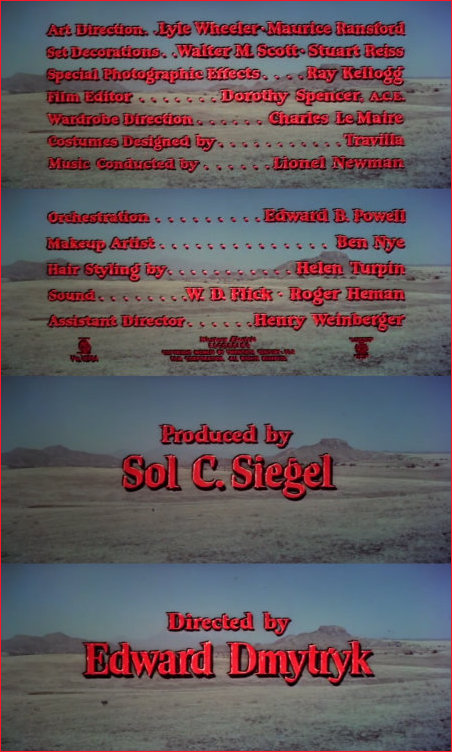 Broken Lance is the story of a family empire in the Old West. The plot is derived from King Lear, though its more direct precursor is the film noir classic House of Strangers (1949), a similarly themed film also written by Philip Yordan. Though Yordan won an Oscar for Original Story for Broken Lance, Richard Murphy wrote the screenplay and also used the 1949 novel I'll Never Go Home Any More by Jerome Weidman as source material.

I must mention the work of Spencer Tracy and Katy Jurado in this film. They are both top-notch. Jurado was nominated for a Best Supporting Actress Oscar while subbing for Dolores del Río who was having visa trouble. In addition, the film is well-cast with reliable character actors in the supporting roles.

The film also benefits from having the talented Edward Dymtryk as a director.  He was known for his films noir and received an Oscar nomination for Best Director for Crossfire (1947). 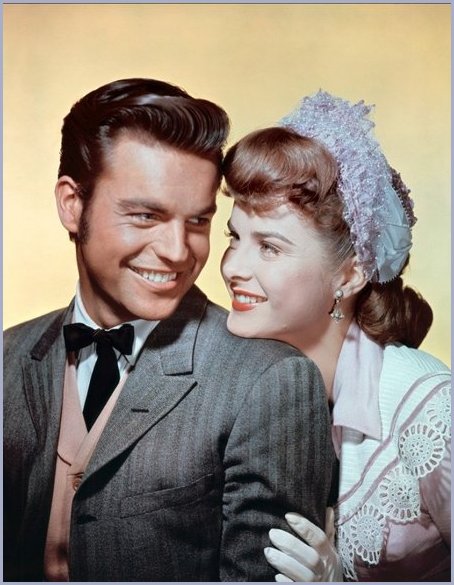 I drool over this photo of Joe (Robert Wagner) and Barbara (Jean Peters) while pretending to take her place. :)

How Mom and I Like to Watch Joe Devereaux

First, we plan the menu for the cinematic event. Most of the time we keep it simple and decide on Half-and-Half Bars (recipe below) and a beverage. A word of warning. Never call the bars Half-Breeds. Joe hates being called that and I don't blame him. It's damn offensive.

Generously grease the bottom and sides of an 8x8-inch baking pan.

Prepare the brownie layer. Mix together the cocoa, flour, salt, and nuts in a large mixing bowl.

With an electric mixer, beat the melted butter and sugar together in a separate mixing bowl. Beat in the eggs, one at a time, and continue beating until it has reached a smooth, light yellow color and creamy consistency. Beat in the vanilla. Add the dry mixture in small amounts, beating on low speed after each addition until batter is well blended. Spoon into your prepared pan

Bake the brownies for 20 minutes. They will not be done, but will just be beginning to set. While the brownies are baking, prepare the blondie batter.

Sift together the flour, baking powder, and salt into a medium-sized mixing bowl. Stir in the walnuts and set aside.

With an electric mixer, beat the melted butter and brown sugar together in a large mixing bowl. Beat in the eggs and vanilla. On low speed, beat in the dry ingredients in small amounts, mixing well after each addition. Fold in the chocolate chips. The batter will be fairly thick.

Bake for 20-30 minutes or until the blondie layer is beginning to lightly brown and a toothpick inserted in the center comes out mostly clean. Place on a wire rack and allow to cool in the pan.

Occasionally our menu gets slightly more elaborate and we make Devereaux Dogs (recipe below) to eat before the dessert.

Generously grease the bottom and sides of a large baking dish.

Put condiments on the hot dog. Mustard, ketchup (or catsup, if you prefer be more formal), onions, and pickles all work well. If you use relish and/or sauerkraut, remove some of the liquid first. I don't recommend using chili until after the hot dogs are cooked.

Top with a slice of cheese. I normally break the cheese in pieces so it covers the whole hot dog.

Put the hot dog/bun combos in the large baking dish.

Cover with aluminum foil, shiny side down. 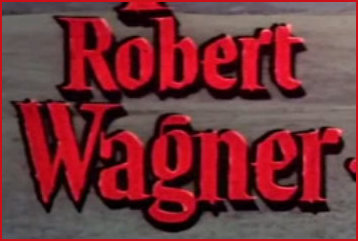 We eat in front of the TV on tray tables and begin to watch the opening credits via Roku and Amazon Prime. We cheer when Robert Wagner's name appears.

Joe is being released from prison for a crime he didn't commit. He went to prison to spare his father the ordeal. Check out the perfect "V" of broad shoulders to narrow waist in the image above. Yummy!

The governor wants Joe to stay away from his daughter. Joe's brothers want him out of town on the 6 p.m. train. Joe throws the wad of moola ($10,000) in the spittoon. Gotta love that boy!
We yell, "Way to go, Joe! Yes!" 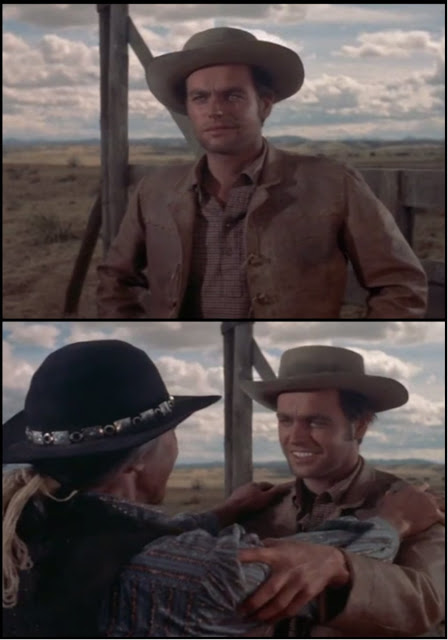 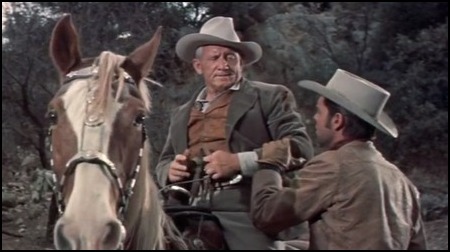 Now there's a flashback to family trouble and what led up to Joe being jailed. Matt catches the two himboes stealing cattle and changing the brand. Matt tells the himboes to get off the ranch. Kindhearted Joe pleads with his father on his half-brothers' behalf in the image above.
That evening, Joe gets the devil from his father for bringing the himboes back to the ranch. Joe get around his father with his charm.
Barbara is about to eat what Matt describes to her as "pickled cactus grapes." Kindly Joe (such a sweetheart) warns Barbara that what she is about to eat is a cayenne pepper. Watch and see what she does. :)
How could a girl not fall in love with a man who brings her milk to cool her burning mouth? Aw, Joe! We love you so! 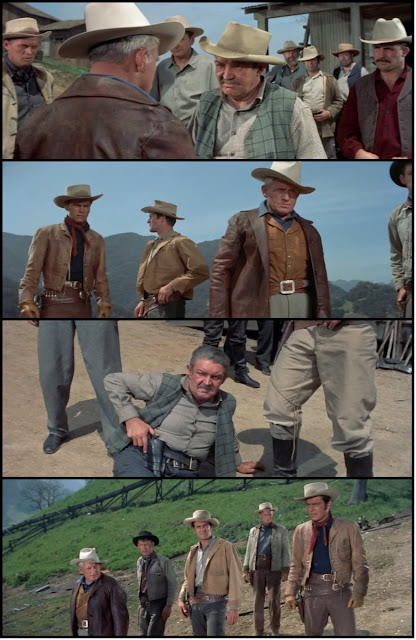 McAndrews (Robert Burton): "You know you're right about one thing, Devereaux! The company didn't send me out here to be buffaloed by a loudmouthed farmer with a squaw for a wife and a half-breed kid!"
Joe: "Go ahead! Pull it! Draw and I'll blow your head off!" 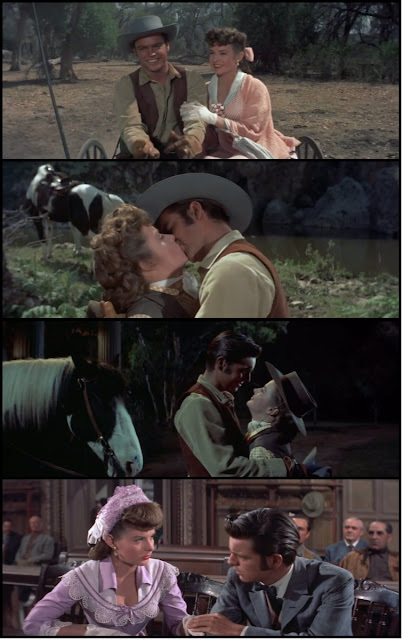 1: Joe drives Barbara home from the ranch the morning after they meet. (I wish! Sniff...sniff.)
2: On the way, Joe takes Barbara to his special place and tells her the story of his parents' romance. He confesses his love. Barbara tells him she returns his love. (She's no fool. What girl wouldn't love him?)
3: Joe wants to speak to her father. Barbara tells Joe she wants to work on her father first. (Her father is a bigoted ass.)
4: Barbara informs Joe that her father did not appoint the judge as Matt had requested because her father asked Matt to break up Joe and Barbara as a condition of the appointment. Matt refused to do it. Joe is mad as hell.

1. Joe is hard at work on the prison rock pile. (Makes me teary-eyed.)
2. Joe resists but the guard brings him in to see Barbara.
3. Barbara tells Joe she loves him and will wait for him. He doesn't want her to waste her life. (The wait would be worth it, believe me.)
4. She doesn't care if he's filthy, sweaty and stinky, Barbara kisses Joe and clings to him. (She's a wise woman! Who could resist him?)
5. Joe asks Barbara not to come back. He can't take it. Her visits almost destroy him.


Part 1 of why the film is titled Broken Lance. Watch and see. :) 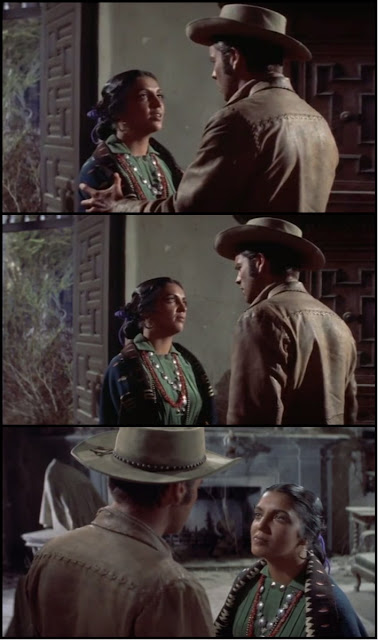 Joe sees his mother for the first time after getting out of prison. He takes his father's pistol from its holster and wants to take revenge against his brothers. She says:

"You are speaking like a boy, my son. And the years should have made you a man."

She gives Joe sage advice about Barbara and life.

"Take her away, Joseph. And when you are together, you will know there is no need for blood."

1 and 2. Joe practices high diving and swimming courtesy of
one who shall not be named because you really need to
watch this terrific film and find out who the creep is.
3. Thank goodness for Two Moons.


Part 2 of why the film is titled Broken Lance. Watch and see. :)

First of all, Robert Wagner is a perfect choice for this blogathon! He certainly looks handsome in this Western.

Secondly, THANK YOU for posting these recipes. What a great ritual for watching this film! I was almost drooling as I was reading the dessert recipe, and I may have to make some very soon.

Thirdly, I've never seen this film, but you have SOLD me. It sounds intriguing, and what a terrific cast! I can tell I'm missing out on a fantastic movie-viewing experience...especially if paired with Half & Half Bars and Devereaux Dogs.

Thanks so much for joining the blogathon! :)

Your post is obviously a labour of love, and the care and detail you lavish on Joe Devereaux and Broken Lance is wonderful. I've not eaten lunch yet, and my mouth is watering at the thought of your Devereaux Dogs!

This is by far this best post in the Reel Infatuation Blogathon I've read today--so detailed and well written...and a recipe to boot! Love that! So right about the "half-breeds" too, I have Native American blood and HATE that. Fun read! Wado (thank you in Cherokee)!

What an amazing post! Next time Broken Lance is on TV, I'll have to prepare those recipes...
I also have a huge crush on Robert Wagner... but once my family told me that "Jonathan Hart" from Hart to Hart had already died... and then I realized they were wrong when he guest-starred in an episode of Two and a Half Men.
Don't forget to read my contribution to the blogathon! :)
Cheers!
Le
http://www.criticaretro.blogspot.com

Promote Your Page Too
Tweets by @meredydotcom